We will depart Siracusa by private coach for a morning visit to the site of ancient Kamarina, home of Psaumis, celebrated in Olympian 4 and 5.  From there, we will continue along the coast, stopping for lunch at Kamarina beach, before an afternoon visit to archaeological museum of Gela. Founded in 688 BCE, Gela was home base for the Deinomenids and the parent city of Akragas (Agrigento) – our next destination.

We’ll check-in to our hotel and take a break before viewing the floodlit temples at night and enjoying an elegant group dinner.No less than five Pindaric odes survive for athletes from Akragas (if you are willing to call Midas the flute player an athlete), and we will visit the ruins of no less than five temples.  We will begin with the Temple of Hera Lacinia and continue downhill to the temples of Concord, Heracles, and Olympian Zeus, finishing up at the temple of Castor and Pollux. 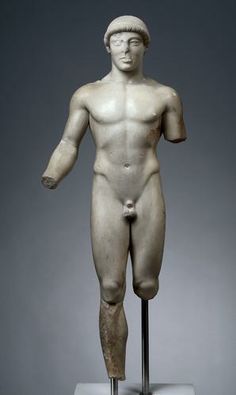 The Ephebe of Agrigento

After a break for lunch, we will visit Agrigento’s magnificent museum, featuring a 5th century marble ephebe and a seven meter-tall reconstructed Telamon from the Temple of Olympian Zeus. Afterward, we will head northeast, arriving around dusk in Cefalù, one of Sicily’s most picturesque villages.  Open night for dinner, a stroll along the beach, and a look at Cefalù’s famous Norman cathedral in the historic center.

Saturday morning will begin with a visit to ancient Himera, which features two museums and the ruins of the Doric Temple of Victory built after the defeat of Hamilcar and the Carthaginians in 480 BCE. Himera was the adopted home of Ergoteles, laudandus of Olympian 12.  From Himera, we will head back south toward Mount Etna and stop for a final group lunch on the slopes of the volcano in the general area of ancient Aitna, linked with Pythian 1, Nemean 1, and Nemean 9.  We will finish the tour in Catania with stops at the airport and downtown (Piazza Borsellino), around 5PM.

Tour includes ground transport by private from Siracusa, two nights hotel with breakfast, and two group dinners.  Space on the tour is limited and billed separately by Exedra.  Places are assigned on a first-paid, first-served basis. Prices range from 449 euro per person in a triple to 599 euro for a single.  Register using the conference registration form.